I saw something last night that nobody may ever see again – a Nine Inch Nails concert.

That coming right from the mouth of the godfather of industrial rock Trent Reznor. The brilliant mastermind behind such classics as “Head Like A Hole”, “Closer”, “The Hand That Feeds”, and the eerily dark “Hurt” (that, at least on some level, I think we all relate to) dropped that bomb on the sold out crowd at the White River Amphitheater Saturday night. Now, he didn’t say definitively that his touring days were all over, but he at least put it out there that this could be his final tour ever, which, up to last night, would have made absolutely no difference to me. But, as all great live performers do, Trent left me wanting more NIN (you hear that, Trent?! I want more of you, you short, ripped, brilliant, man! …did that just get weird?).

Now, I’ve always liked NIN (sorry, I can’t find the backwards “N” button on my CPU), but anyone who knows my musical tastes knows I wanted tickets for this concert to see Soundgarden…again (big ups to my wife, Nina, for bearing with me through two Soundgarden concerts now!). I’ve been a Soundgarden fan since the first time I clicked play on my totally radical stereo system that played both CDs and tapes and “Superunknown” spun at 500 revs per minute in my CD player. I’ve since come to fully appreciate the band’s entire catalogue (maybe even as much as “The Bobs” appreciate Michael Bolton’s); from “Beyond the Wheel” to “Searching With My Good Eye Closed” (video by your’s truly) I have become a huge fan. 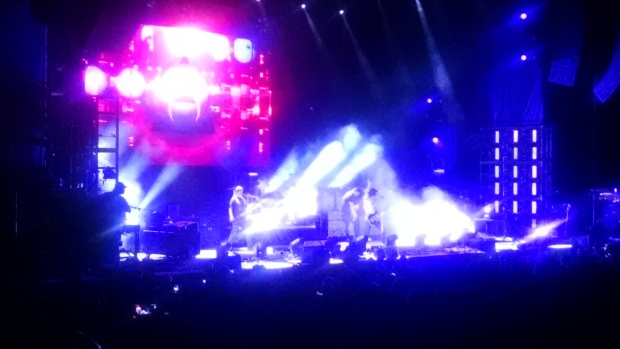 Soundgarden in classic form at the White River Amphitheater.

The one inevitable thing that happens to singers – and it happens at varying times of careers – is their voices start to “go.” For some, it’s not that big of a deal as they may not be known for hitting high notes (*insert every hardcore/death metal/speed metal/Norwegian black metal singer ever), but for guys like Chris Cornell it’s pretty obvious when the ability to reach those higher octaves is beyond their grasps.

I was told by a buddy who played a festival with Soundgarden earlier this summer that ole Chris wasn’t quite sounding like, well, ole Chris (take a listen to hear the iconic high notes I speak of. Go in 38 seconds to hear the pipes). So, needless to say, I was a touch concerned about Chris (you like how I keep using his first name like we’re bros, which we toats are?) simply singing a word and letting Matt Cameron bang in a filler on the drums instead of holding that high pitched yell when the time came. Well, folks, I’m here to tell ye that my boy Chris (bffs!) still posses the golden pipes in his chest! (exhibit A fast forward to 3:40, exhibit B watch the whole damn thing!) He put my mind to rest during “Jesus Christ Pose” and once again whilst belting out “Outshined.”

My boys from Seattle, who helped put Sub Pop Records on the map and served as inspiration to the likes of Nirvana (check out Dave “Fucking” Grohl’s take on them here), put on one hell of a show. Chris was awesome, Kim Thayil kept the music hard and dark on the lead axe, Ben Shepherd did his thing on bass and the very underrated Matt Cameron was back behind the kit after missing most of the tour to other obligations with his family and Pearl Jam. They fucking rocked – as expected!

The opening act, Cold Cave, did what they did fairly well, but they struck me as a poor man’s Depeche Mode. And I reckon I wasn’t surprised NIN (still can’t find that damn button) put on a good show, but I was surprised by how much I really, really, really enjoyed their set. The combination of the electronic with guitars and drums was absolutely mind blowing. As a fellow writer of words described Reznor, and I’m paraphrasing here, “Reznor is a master of sound.” He is indeed, Jake.

Here’s to hoping we didn’t all witness history this weekend, and that someday the NIN will ride again…we want more, Trent!

This is what Smitty Sayeth…

Links to videos I took at said concert: