I love baseball.
To those who know me well, that may be the biggest “Duh!” statement of all time. For those of you who don’t know me or only kinda-sorta-not-really know me, take a look at my wedding ring next time you see me and you’ll get the drift (or just check out the pic below).

My custom baseball lace and black diamond wedding ring designed by my wife and our jeweler.

With all Major League teams’ pitchers and catchers reporting by the end of this weekend for Spring Training, I thought it prudent to write my first (of what I’m sure will be many) baseball blog.

There are many reasons I love baseball: the games within the game, which are almost too numerous to count; the grind-it-out mentality successful teams must have – working pitch counts as a hitter, not giving into hitters as a pitcher, and continuously taking advantage of the other team’s mistakes; and the game’s ever-present history are just a few of the things that have made me a lifelong baseball fan. But the thing that most keeps me coming back year after year is nostalgia.

Nostalgia is a powerful tool. It’s that burning desire we all have to relive, if even just for a moment, the good times gone by. If you pay attention, you’ll notice how often nostalgia is used in marketing. If the a company can convince you that their product will give you those warm fuzzies all over again, your wallet opens up and your money pours out. Baseball does this for me.

The game that has its beginnings tied to cricket and not created by, as some history books will tell you, Civil War Union General Abner Doubleday, captured my intrigue at the ripe age of six. I was living in Kodiak, Alaska and they year was 1987. Now, I had known about baseball and had even played for a few years by this time, but it was 1987 the great Harry Caray uttered the (most likely drunken) words, “And in right today, we have perennial gold glover, three-time all star and former rookie of the year Andre Dawson, who we signed as a free agent this spring.” Of course, I was six and I don’t remember exactly what the Hall of Fame announcer said, but surely it was something to that effect. 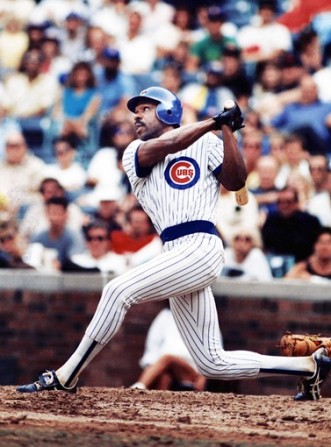 Living in Alaska in the 80s was great for a young kid who loved to be outdoors and fish in one of the premier salmon spots in the world. But as for watching baseball, WGN was about the only option we had for watching my new favorite game ( I don’t recall if we got TBS up there or not). So I was bound to become either a Cubs or White Sox fan – thankfully, I chose the Cubbies.

“The Hawk” as Dawson was known, went on to have the best seasons of his career that year smacking 49 home runs and driving in 137 RBI on his way to his first, and only, MVP Award – I was a fan for life!

Some of my fondest memories from Alaska (outside of catching salmon every summer with my dad, Daryl) were the back and forths my dad and I had when my Cubbies played his Atlanta Braves. Now, my dad is from the deep South in Southern Mississippi so it makes sense he was a Braves fan. But little did I know that the man who turned him into a Braves backer would soon do the same to me.

My sister, Christina, and I moved in with my dad in 1990 when he moved to Mobile, Alabama. Me and Tina (as I call her) spent a lot of time at my grandparents’ place just across the border in Forts Lake, Mississippi back then. It was during those times we spent there that I learned what it meant to be a real baseball fan.

My late grandpa Smith was the epitome of a die hard baseball fan, more specifically a hardcore Braves fan – the man never missed a game! In all the years I knew him, I never saw an inning of Braves baseball on TV go by without him being right in front of the tube. Anytime a game was on, he’d have me come sit next to him and he’d teach me everything he knew about the game. He taught me what a “southpaw” was, what a breaking ball was and why sliding into first to beat out a throw usually isn’t a good idea. He also got me into the statistics of the game – what a good batting average was, what a good ERA was and why nobody would ever touch Hank Aaron’s home run record of 715. These were the years that shaped me as a baseball fan and got me on the Braves bandwagon (which was real easy to do after the 1991 season).

I moved away not too many years later (about 1994, I believe) and never really saw my grandpa too much after that. By the time I did see him again, he had suffered some strokes and heart attacks, which left him essentially confined to his La-Z-Boy recliner with little eyesight and even worse hearing. But the few times we did have together after I moved away, we still talked about the one thing that really brought us together – baseball.

I bought him a baseball signed by a middle infielder who played for the Braves then the Cubs back then, Jeff Blauser. Blauser was not a great player by any means. But he was a hard-nosed, grind-it-out kind of guy and my grandpa loved him. He’d always say, “That Jeff Blauser, he’s my boy.” I bought the ball as a 50th wedding anniversary present because I knew it would express to him, even in his deteriorating state of health, how much those times we spent together meant to me.

When I gave that ball to him while he sat in that La-Z-Boy recliner, he cried. This was a man who served in the Army during Korea, worked in a paper mill for 41 years and raised 11 kids; he was a man’s man and I had never seen a tear in his eye until that day. Years later, my uncle Chris told me that was one of only two times he had ever seen my grandpa cry. To this day I remain both a Cubs and Braves fan because of that man (with a shout out to Francisco Cabrera, Sid Bream and Barry Bonds’ weak throwing arm). 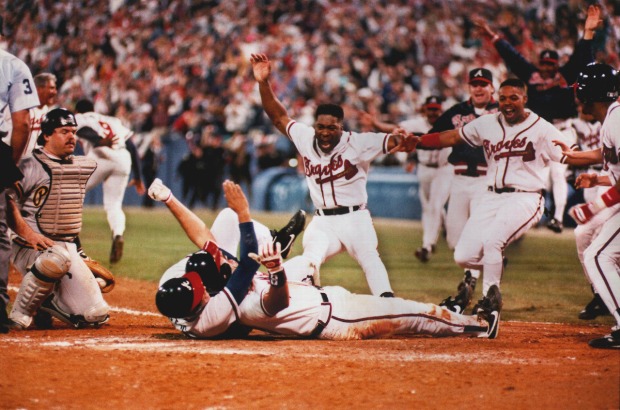 Sid Bream , prone on the ground, gets mobbed by teammates after scoring the winning run in the bottom of the 9th inning of Game 7 of the 1992 NLCS vs the Pittsburg Pirates, giving the Braves the NL Championship. The lumbering Bream scored from 2nd on a Cabrera single to end the game.                       (AJC Staff/FRANK NIEMEIR)

I have been lucky enough to have experienced many memorable (to me) and historic (to the game) moments in person. I was at the Kingdome on May 29, 1995 when Rich Amaral hit a walk-off homer to beat the Yankees and spoil future Hall of Famer Derek Jeter’s first game as a big leaguer. I was at Safeco Field with my friend Casey on October 1, 2004 when Ichiro broke George Sisler’s single season hit record. I was again with my friend Casey on May 14, 2012 when I caught Bryce Harper’s (who is one of the best things going on in baseball today and has all the skills to be a Hall of Famer) first career home run on video (check it out here). And I was lucky enough to see my beloved Cubbies win when my wife and I (we were dating at the time) went to Wrigley Field for the first time back in 2011.

But the one thing that was and is always in the back of my head – when I’m keeping score at a game, or am fortunate enough to experience one of those magical moments baseball throws at us every now and then – is my time spent next to my grandpa learning the game all those years before in an air conditioned living room during a hot and muggy Southern Mississippi summer day.